Back in 2014, I published a book called Hollow Space: Venture with my great friend and co-author, Steve Godden (aka T.F. Grant). It was very well received, and one of my best-selling books for that year. It’s one of, if not my favourite book that I’ve worked on. And not purely because of the story—though I do love it—but also because it is a lasting connection to my late friend. 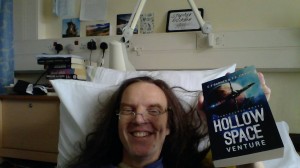 Steve sadly and suddenly passed away just a few weeks after publishing the book.

It was his first published novel. I can only be thankful that before cancer took him, he got to see it rocking the charts. At one point, it was out-selling George RR Martin and JK Rowling. It was a No.1 hit in a number of countries.

Readers generally loved the anarchic, unique story. And this was in part due to Steve’s creative genius. His friends and I referred to him as a poet. He had a unique style, a rich, imaginative voice, and a deft skill at spinning tales. He was a true scribe who never truly got to share the extent of his capabilities with the world.

I can only be thankful that we got to work together on Hollow Space: Venture, and that some of his talent is available for people to enjoy (Among his other posthumous books). Since he passed, I’ve missed him terribly, but every time I pick up the book, I’m taken right back to 2013/2014 and that fertile, creative, and somewhat innocent time. I still hear some of the character’s dialogue in his voice.

The thing that made this particular book special to me was how we worked on it. In my other collaborative efforts, we usually outline fairly extensively, both in the planning and drafting stage. This makes the process generally smoother and quicker.

If both writers know the story and characters, then each can work on individual chapters knowing that it will all fit together. It’s a method that works well.

With Steve and I, that was not the case. I’m generally speaking a plotter, an outliner, especially so back then.

Steve wasn’t. At all.

He abhorred planning. He was a dyed-in-the-wool pantser—someone who thrives by writing from the seat of their pants, following their muse (or subconscious), going wherever the story drags them. I would say that Steve was a more pure writer than I, connected, as he was, to the creative process fully.

Given this dichotomy, we were essentially chalk and cheese writing-wise.

It was that creative tension that made the book what it is. By far my most creative story. Steve forced me to learn to have faith in both myself and in the dimension of the story. I opened up, as it were, and became less rigid, less judgemental of what was bubbling up during the writing sessions.

Before, if something came up that I hadn’t outlined, I’d either ignore it or adjust the outline. Steve taught me to ‘just go with it,’ even if it seemed at the time to break the story or introduce a plot element or character that didn’t seem to fit into the overall story. Suffice to say, this was initially difficult for me to accept. All these loose threads, these chaotic elements—how could they possibly weave into a coherent story?

And yet, as ever, Steve was right.

A character that randomly popped up in a seemingly incongruous way would later come to be just what we needed to tie a sub-plot together. A piece of dialogue that seemed to not fit the plot we’d written so far became a pivotal character growth moment. And so on.

Writing this way with Steve became a kind of creative one-upmanship.

Whereas with my other co-authors we would each write a chapter from the point of view of a given character from an outline, Steve and I were writing the story in a linear mode, writing one chapter at a time in a round-robin fashion. For example—I would write say Chapter One and handed it over to him. He would take what I had written and write Chapter Two, building upon the story and introducing new characters or plot points.

It became a game of sorts, where each of us would introduce cliffhangers, new characters, or other moments to ‘stump the other’, thus often forcing creative solutions. I had learned from this process that it was almost impossible to write oneself into a corner. There was always a creative solution, no matter how impossible it seemed.

This method led to what I believe to be a unique and interesting story.

It’s not yet another cookie-cutter book with the same old plot we’ve read or watched a hundred times before. If the writers didn’t even know where it was going or what was happening in a given moment, then surely the reader wouldn’t.

All this is to illustrate how difficult it seemed to write the follow-ups after Steve had passed. Without his talent and his way of working, how could I possibly recreate that fertile environment and do the book and him justice?

For years, I knew I couldn’t. And didn’t.

But now? Perhaps enough time has passed that I can attempt to consider writing more in his memory. It would be different compared to what Steve and I would have written, that’s certain, but perhaps that doesn’t mean I can’t still add a worthy addition(s) to the series.

Different doesn’t necessarily have to be worse.

As he had often said to me—I just need to have faith and go with it.

I’m not promising anything, but I’m no longer entirely discounting the possibility of writing more in this universe. Re-visiting the world we created together no longer seems as painful as it once did. Whatever I decide, Steve will always remain at the forefront of my thoughts.

Although his legacy is small, it’s by no means insignificant.

Thanks, Steve. I miss you, mate.